Pondering the palaces of Palestine

In the 42 years since the founding of LEMA’AN ZION, we have revealed an Israel the world seldom sees. The picture painted by the news media is a different one than the one I see as a resident of Jerusalem.

When friends from Canada visited Israel for the first time a few years ago, they were surprised. They were only half-jokingly expecting to see vast expanses of desert sands, ragged tent villages and herds of camels!

The thriving, modern, successful, yes, even spiritual Jewish state is alien to most outsiders. Israel’s scientific advances at the forefront of the medical, bio-tech and agri-tech fields are barely known.

Part of the reason for the false perceptions of Israel by so many people is because the mainstream news media are overwhelmingly hostile to the Jewish state. Typically, reporters share far-left political and socio-economic views. Their scripts, audio and pictures are predominantly negative. Falling prey to Arab and Muslim propaganda and their own prejudices, the news media ignore history, ignore context and ignore the (old-fashioned!) Bible record regarding Israel and the Jews.

If you value your life, be silent

The news media ignore something else: The facts of what is going on among the Palestinian-Arabs. How the people are oppressed by their own Arab leaders, intimidated, incited to violence daily, kept in poverty, with their humanitarian needs barely addressed, is not a news story.

It is no secret that any reporter valuing his life would not dare publish a report critical of the Palestinian Authority or the Hamas terrorist group from within their territories. Journalists receive detailed instructions on how they are required to report on PA and Hamas activities, what subjects are forbidden, even what words they can or cannot use.

The only criticism permitted is of Israel. In a very real sense, with the exception of Israel, reporting from the Middle East is a cut-throat business. The lifeless bodies of those who defied orders are a warning to others.

Unfortunately, someone who reads the newspaper in Berlin, Melbourne or Vancouver has no idea of any of this and likely believes they are getting the whole picture.

But it’s not just the journalist who needs to be careful. It goes so far that not even PA President Mahmoud Abbas would dare sign a peace agreement with Israel without wishing for the same fate met by Egyptian President Anwar Sadat. (He was assassinated on October 6, 1981, as retribution for signing a peace agreement with Israeli Prime Minister Menachem Begin on September 17, 1978.)

The image fostered by the PA’s army of propagandists and spokesmen is of a people in fear, persecuted, homeless and occupied, denied human rights–all because of Israel. That’s the myth.

Where did all the money go? 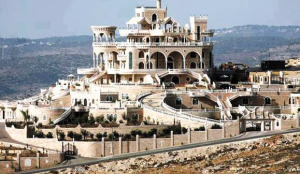 The reality is their territories have been awash with funds, but billions have been hidden in secret personal accounts in Switzerland and elsewhere. The economy, though faltering at times, is growing. Construction is booming, new cities are being built. Education is more widely available than anywhere else in the Arab world.

The pompous palaces and snooty mansions of billionaires, business tycoons and scores of government leaders reveal a Palestine of luxury for a favored few. Oh, and the upper class would urge the liberal politicians of the European Union, the Americas and Asia to keep emptying their charity coffers to help the hunkering masses in the Palestinian refugee camps! 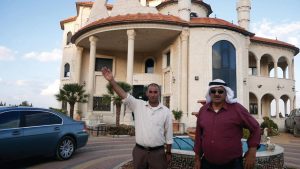 There are social-welfare programs in place to assist those in need, and infrastructure exists to support the proper functioning of the PA, but there is much waste due to corruption and nepotism. Chronic shortages and widespread unemployment are the result. The convenient and contrived scapegoat is always Israel, so the gullible masses direct their anger at Jews, rather than their own leaders.

The key to financial freedom

In one area, however, money is always available.

Those who become terrorists, engaging in violence against Jews, who are captured and imprisoned by Israel, are celebrated heroes and their families are financed by monthly Palestinian pensions. The size of the pension depends on the crime committed. The murder of multiple Jews is more handsomely rewarded than a non-fatal stabbing.

All Israel is a settlement

It is commonly believed the Palestinians are only opposed to the so-called Israeli settlements (sic) of Judea and Samaria (the West Bank). That is simply rhetoric. The Muslim-Arab journalist Bassam Tawil points out that most Palestinian media view all Israel as “occupied Palestine” (“Palestinians: Why Allow Facts to Get in the Way?,” Gatestone Institute, August 28, 2019):

“They see zero difference between a Jew living in the West Bank and a Jew living inside Israel. For them, all Jews are settlers and colonizers, and all cities inside Israel–Tel Aviv, Haifa, Ashkelon, Ashdod, Eilat…are ‘occupied.’ In the eyes of Palestinians, all of Israel is ‘occupied’ and a ‘settlement’….The rhetoric and fabrications of the Palestinian media are simply part of a longstanding Palestinian campaign of incitement against Israel and Jews.”

In the version of history fed to the media by the PA, the establishment of Israel in 1948 was the cause of Palestinian anger. But that is a fiction.

First, “Palestinian” identity took another two decades to appear. The entire region was populated by Arabs of varying descent, who arrived from abroad to get work in the flourishing economy that the Jews were creating while under British control. Local Arabs, whose families had been there for generations, were few in number.

Second, anti-Jewish hatred began long before David Ben-Gurion declared Israeli independence on May 14, 1948. Arab mobs, incited by their leaders, perpetrated massacres against Jewish communities in Tel Hai and Nebi Musa in 1920, in Jaffa in 1921 and 1936, and in Safed in 1929.

In Hebron in August 1929, a false rumor was spread that two Arabs had been killed by Jews. Crazed mobs of Arabs gathered eager to sate their bloodlust. The reported details are gruesome. Jewish women and girls were raped and mutilated while husbands and fathers were forced to watch. Then they too were slaughtered. Children and the elderly were butchered without mercy. In all, 67 Jews were murdered under the watch of the British.

Sixty years later, peace seemed inevitable. A whirlwind of diplomatic activity in the 1990s culminated with a meeting in Gaza on December 14, 1998, at which then-US President Bill Clinton appeared with Palestine Liberation Organization Chairman Yassir Arafat before the members of the Palestine National Council.

As the world watched the live broadcast breathlessly, Arafat held a vote confirming a letter he had sent to President Clinton in favor of peace. That vote passed. The media were jubilant. Within moments. The vote was the number one news story worldwide.

Today, the hatred is the same as in 1929, only the messenger has changed. In recent months, the media watchdog group Palestinian Media Watch has exposed the PA’s program of anti-Israel incitement and outright anti-Semitism via the Facebook social-media platform.

In just one mild example, (PMW Bulletin, September 26, 2019), the PLO’s largest party, Fatah, headed by PA President Mahmoud Abbas, posted a report by spokesman Dr. Iyad Abu Zneit on Fatah’s official Facebook page on July 15 repeating the old anti-Semitic canard that the Jews conspired with the Nazis to create the Holocaust and enrich themselves:

“[The Jews] were hated because of their racism and their filthy behavior….The rich people of the [Jewish] tribe led the project to enslave humanity and exploit it, while trading in the blood of their own people, enjoying their weakness, and creating ties with those [Nazis] who burned them, in order to turn them into a tool of production and to accumulate wealth.”

For decades, Arab nations and non-Arab Muslim nations worked together politically in support of the Palestinian-Arabs. They created a united and very powerful front at the United Nations and other international bodies. 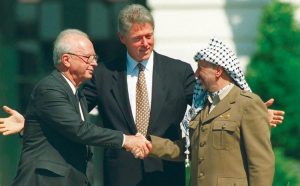 Toameh quotes the Saudi writer Mohammed al-Shaikh saying wherever the Palestinians go they cause trouble:

Even more blunt is the prominent Kuwaiti editor Ahmad al-Jaralah:

For as long as it lasts, this is good for Israel.

But the mainstream news media won’t bother with the real story. Their minds are made up, they won’t admit having been wrong for decades.

The astute reader interested in learning the truth about developments in the Israel of the Bible, and in learning about the People of the Book and how they fulfill the prophecies of millennia ago, must rely on the Bible in one hand and a trustworthy report in the other. We are grateful to our friends worldwide who help us faithfully in this endeavor.

Previous An excellent year and an incredible decade

Next The end of democracy in Israel?